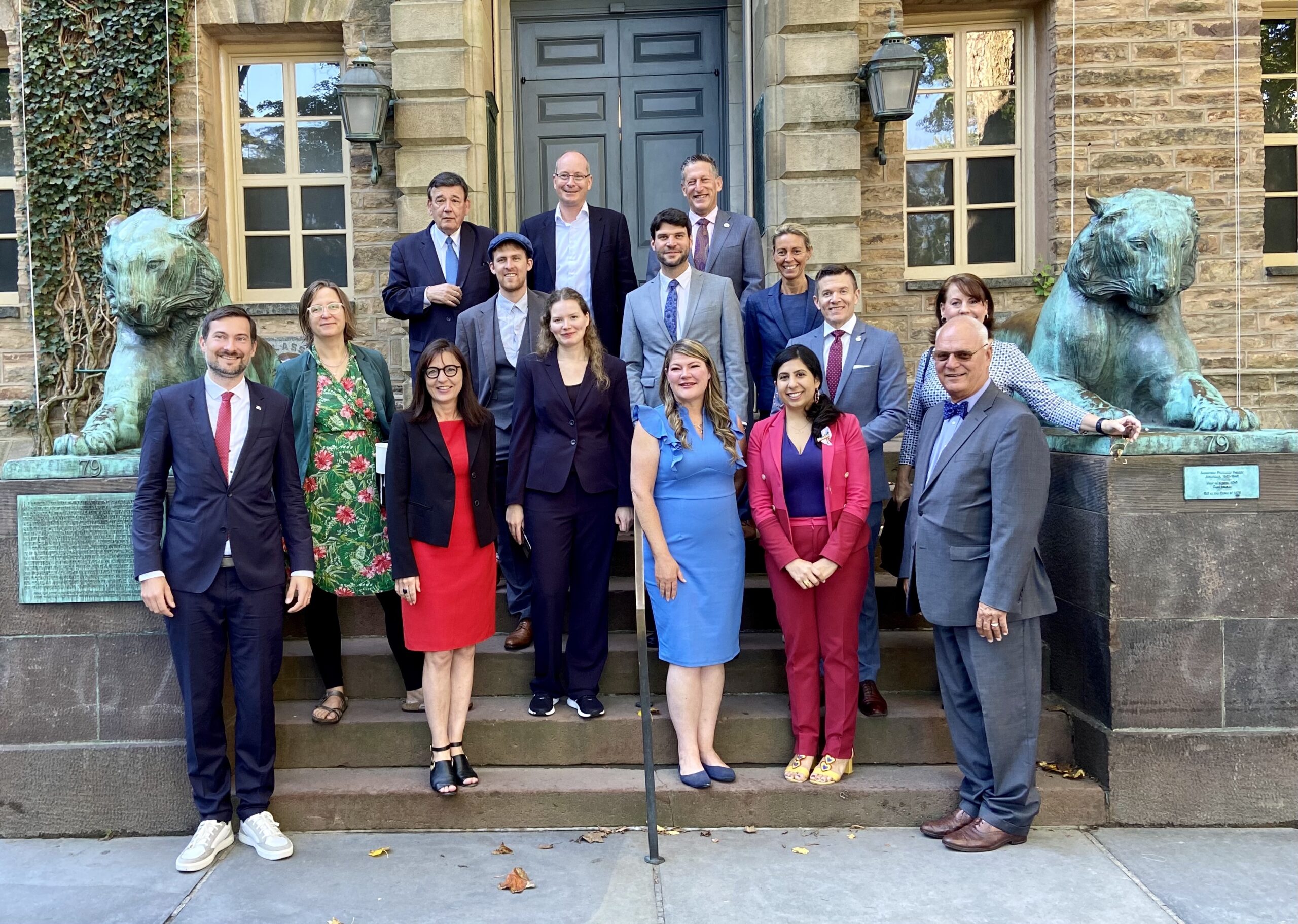 From September 13 to September 17, 2022, the second in-person meeting of this year’s cohort of the Laboratories of Democracy Initiative took place in New Jersey. Each year, the project brings together a group of German and U.S. state legislators for two study tours – one to Germany and one to the United States – and virtual meetings. The goal of the project is to promote values-based dialogue and exchange of ideas on common policy challenges at the subnational level. Climate and energy were at the forefront of the 2022 round of exchanges. In addition to closed-group discussions between the participating state legislators, the program in New Jersey included meetings with state government representatives and experts on climate and energy. Visits to local research institutions and universities allowed participants to learn about current research efforts on energy efficiency and climate resilience and build on their experiences from their visit to Mecklenburg-Western-Pomerania in May.
The program kicked-off with a visit to Princeton University. During a guided tour and an exchange with Thomas Nyquist, Executive Director of Facilities Engineering, and Shana Weber, Director of the Office of Sustainability, the group learned about the new geo-exchange systems that will make the university climate neutral by 2046. In Trenton, the state capital of New Jersey, the participating delegates were able to meet with experts from the administration to discuss the state government’s plans in the areas of sustainable energy production and climate resilience. Among others, the group met with President Joseph L. Fiordalisoand Director of Clean Energy Kelly Mooij of the New Jersey Board of Public Utilities, the state agency responsible for energy policy. In a discussion with Shawn LaTourette, the Commissioner of Environmental Protection, the participants learned about the effects of climate change on New Jersey and the state’s adaption and mitigation efforts.  A particular highlight of the visit to Trenton was a personal meeting with the Governor of New Jersey, Phil Murphy, to discuss the political challenges of implementing climate protection measures and transatlantic cooperation opportunities. The day ended with a historic tour of Washington Crossing, the famous spot where George Washington passed the Delaware River in 1776 during the American Revolutionary War.
In an engaging discussion with Tim Sullivan, CEO of the New Jersey Economic Development Authority, the participants were able to talk about the expansion goals for renewable energies in the state and learn about the development of major projects, such as the planned offshore wind farm off the coast of New Jersey. The second full program day continued with a visit to the Princeton Plasma Physics Laboratory, a national laboratory for plasma physics and nuclear fusion science. There, the group was given the opportunity to tour a test reactor where research is being conducted on how to use fusion energy to generate electricity. Timothy Meyer, Deputy Director for Operations and Chief Operating Officer, provided additional insights into the laboratory and ongoing research projects. In the afternoon, the 2022 cohort discussed and developed ideas for policy recommendations for the state level and for transatlantic cooperation during a closed-door workshop.
The U.S.-German delegation also had the opportunity to visit the New Jersey State House on a guided tour and to discuss the role of state legislators in climate protection and energy policy with Assembly Speaker Craig Coughlin and Assemblyman Robert Karabinchak. At the Stevens Institute of Technology in Hoboken, the delegation was given a demonstration of an innovative wave energy system. They also had the opportunity to talk with University President Dr. Nariman Farvardin and leading researchers about ongoing research projects and forms of cooperation between science and politics. For the farewell dinner, the group was joined by the Mayor of Princeton, Mark Freda, and had a chance to further discuss the role of cities in subnational climate action.
The Aspen Institute Germany would like to thank all participants of the second year of the Laboratories of Democracy Initiative: Barbara Becker MdL (CSU), Member of the Bavarian State Parliament; Assemblymember Tasha Boerner Horvath (D), Member of the California State Assembly; Hannes Damm MdL (Bündnis 90/Die Grünen), Member of the State Parliament of Mecklenburg-Vorpommern; Representative Anna Eskamani (D), Member of the Florida State House of Representatives; Silke Gebel MdA (Bündnis 90/Die Grünen), Chairwoman of the Green Party in the Berlin House of Representatives; Assemblymember Don Guardian (R), Member of the New Jersey General Assembly; Daniel Karrais MdL(FDP), Member of the State Parliament of Baden-Württemberg; Tamara Müller MdL (SPD), Member of the State Parliament of Rhineland-Palatinate; Senator Marc Pacheco (D), Member of the Massachusetts State Senate; Senator Ann Rivers (R), Member of the Washington State Senate; Gerd Schreiner MdL (CDU), Member of the Rhineland-Palatinate State Parliament; Senator Ryan Weld (R), Majority Leader of the West Virginia State Senate; Christian Winter MdL (SPD), Member of the Mecklenburg-Vorpommern State Parliament; Senator Andrew Zwicker (D), Member of the New Jersey State Senate.
The project is supported by the Transatlantic Program of the Federal Republic of Germany with funds from the European Recovery Program (ERP) of the Federal Ministry of Economics and Climate Protection (BMWK).