On April 14, 2021 the Aspen Institute Germany hosted an online discussion on the topic “EU, International, and Domestic Affairs: What Lies Ahead for Bosnia and Herzegovina?” with Anida Šabanović, Director, Foreign Policy Initiative BH; Ambassador Johann Sattler, Head of the Delegation of the European Union to Bosnia and Herzegovina and European Union Special Representative in Bosnia and Herzegovina; and Ambassador Susanne Schütz, Director for South-Eastern Europe, Turkey, OSCE and Council of Europe, German Federal Foreign Office. The discussion was moderated by Valeska Esch, Deputy Executive Director and Program Director Europe, Aspen Institute Germany.
Bosnia and Herzegovina has been a potential candidate for EU membership since 2003 and officially applied for EU membership in 2016. In 2019, the Commission identified 14 key priorities, including reforms in the areas of democracy/functionality, rule of law, fundamental rights, and public administration that need to be addressed in order to start EU accession negotiations. Currently, the EU accession process seems to have stalled. Corruption, cronyism, and ethnic divisions continue to challenge an already difficult governance system, which requires fundamental reform prior to a possible EU membership of Bosnia and Herzegovina. A prerequisite for the EU accession negotiations is a reform of the constitution to make the state functional and efficient again. However, a solution is currently nowhere in sight.
In order to support Bosnia and Herzegovina on its reform path, Germany has nominated former Federal Minister Christian Schmidt, MP from the Christian Social Union, as the new head of the Office of the High Representative (OHR), which is responsible for the implementation of the Dayton Peace Agreement, triggering debates about the general role of the OHR. Against this background, key points of the discussion were the election law reforms, the proposed constitutional reforms, the role of the OHR and other international actors, as well as overcoming ethnic and nationalistic divides.
During the discussion, it was mentioned that key priorities which need to be addressed in order to accelerate Bosnia and Herzegovina’s EU accession process should include rule of law, democracy and public administration. Some advances were also praised such as an electoral reform which led to the first democratic elections in Mostar in over a decade. However, nationalistic trends and ethnic tensions were regarded with apprehension and discussions of ethnic borders and secession were harshly criticized. The necessary electoral law reform including changes to Bosnia and Herzegovina’s constitution were viewed as an opportunity to improve democratic functions and civic participation of all citizens, however it was noted this could only be achieved through an inclusive and public national debate, with involvement of opposition, civil society, and academia. Above all, the importance of the international community in Bosnia and Herzegovina and the wider region was noted, especially the roles of the EU, the OHR, the OSCE, and the United States. As growing influence from external actors undermining Bosnia and Herzegovina’s Euroatlantic integration was viewed with trepidation, the speakers emphasized the need for a more dynamic collaboration with EU representatives and politicians and civil society in Bosnia and Herzegovina in order to ensure growth and stability for Bosnia and Herzegovina and the region at large.
The virtual discussion was part of the Aspen Berlin Policy Hub for think tanks from the Western Balkans, a project funded by the Open Society Foundations and the German Federal Press Agency.
For further information, the policy brief by the Foreign Policy Initiative BH on “Road Ahead for Bosnia and Herzegovina: New Opportunities or the Preservation of the Status Quo?” can be found here: 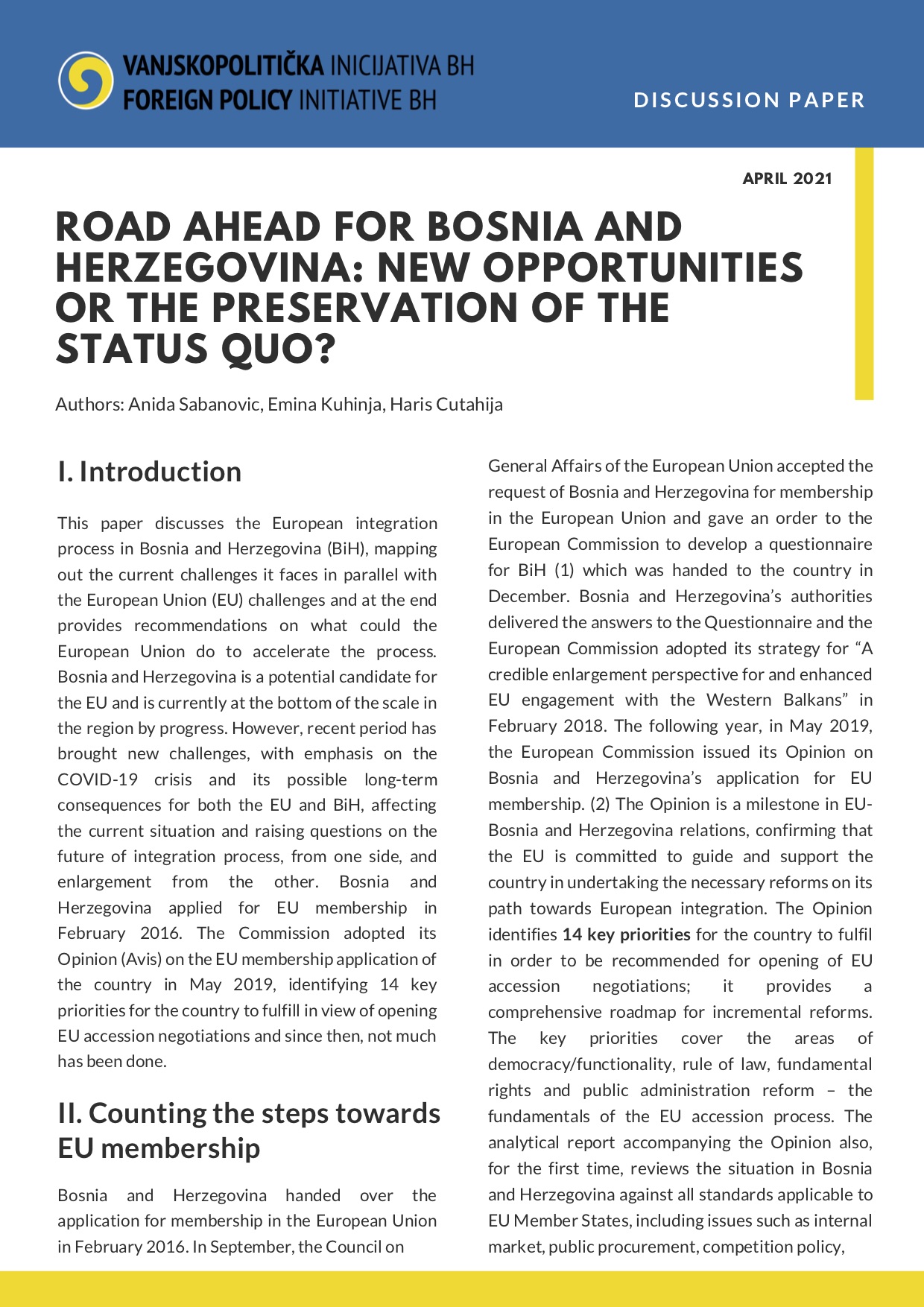