On April 22, 2021, the Aspen Institute Germany hosted an online discussion on the topic “Reforms, Geopolitics, Covid-19: What Future for Serbia’s EU Aspirations?” with Nikola Burazer, Programme Director, Centre for Contemporary Politics, and Thomas Motak, Deputy Head of Division E12, EU External Affairs (EU Enlargement, European Neighbourhood Policy, EU External Financing Instruments), German Federal Foreign Office. The discussion was moderated by Valeska Esch, Deputy Executive Director, and Program Director Europe, Aspen Institute Germany.
Serbia’s EU accession negotiations have stalled recently. In 2020, Serbia was unable to open a single negotiating chapter due to lack of progress in the areas of democracy, media freedom, and the judicial system, and the country will not be able to close any new chapters in the EU accession negotiations before fulfilling all requirements concerning the rule of law. This is the conclusion of a non-paper on the application of the new EU enlargement methodology to the Serbian accession negotiations presented by the European Commissioner for Enlargement, Olivér Várhelyi. In fact, media freedom in Serbia is reported to decline continuously, as the conditions for journalists have been deteriorating in recent years. The World Press Freedom Index from Reporters Without Borders places Serbia as 93rd out of 180 countries in its 2020 world rankings, a decrease of 39 ranks since 2014. This trend is consistent with the Economist’s Democracy Index 2020, in which Serbia’s ranking has been continuously worsening over the past 6 years and Freedom House, which demoted the country into the category of transitional or hybrid regimes in 2019.
At the same time, the country has made great progress in vaccinating its population against COVID-19 due to the massive use of the vaccine developed in China, while new infections remain high. Overall, relations with China have further intensified over the past year, and Chinese support during the pandemic has been widely covered by the Serbian media, while the EU’s support received only little attention.
The conversation therefore focused on expectations towards Serbia’s reforms regarding democracy and rule of law, also considering the revised enlargement methodology. Other topics of discussion included Serbia’s geopolitical interests, the need for enhanced foreign policy alignment with the EU’s CFSP, the influence of external actors, and the reasons for the deterioration of media freedom in Serbia.
The virtual discussion was part of the Aspen Berlin Policy Hub for think tanks from the Western Balkans, a project funded by the Open Society Foundations and the German Federal Press Agency.
For further information, the policy brief by the Centre for Contemporary Politics on “Serbian Media: Threat to Democracy, Opportunity for Anti-EU Narratives” can be found here: 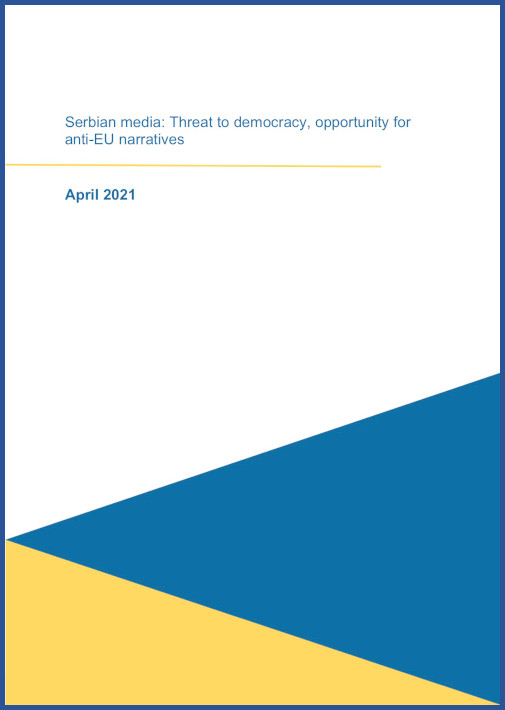